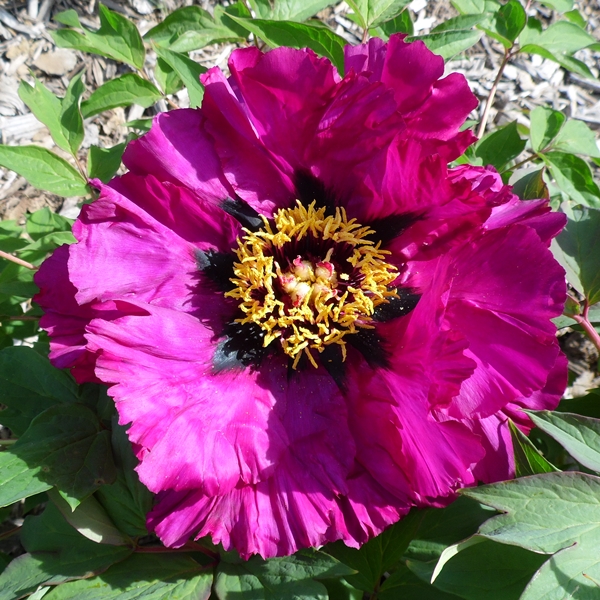 Paeonia rockii is a woody peony (tree peony) originating from cold climate areas of China.  Depending on the cultivar, some may attain heights of 6 feet and 8 or more feet in width when mature.  Most are more reasonable in size with the average plant reaching 4 feet in height by 4 feet in width.  Flowers are carried in profusion and are sweetly scented.  Rockii hybrids are most often derived from crosses with P. suffruticosa (P. suffruticosa is often difficult to keep healthy in our erratic continental climate), which are quite compatible in the production of viable seed.  These rockii x suffruticosa crosses often capture some of most positive characteristics of their parents-flower size, color, fragrance and hardiness.  The inclusion of P. rockii genes in the offspring of this cross often increases tolerance to irregular or erratic soil moisture in the environment.  Whether the flower form is double or single, the dark flares are an indicator that P. rockii is part of the plant’s lineage.   Most American gardeners have yet to become familiar with this wonderful group of woody peonies and will likely be quickly won over by its many virtues. 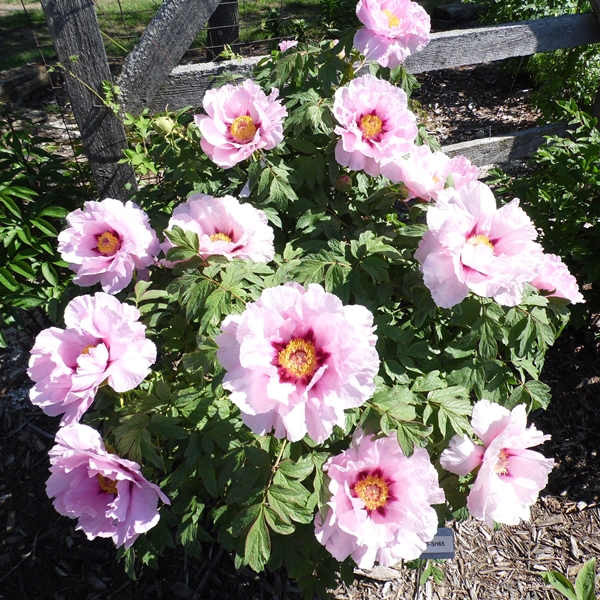 Culture is generally easy with this group.  Like most peonies they would prefer a well-drained soil that does not become soggy at any point in the year.   We’ve found them to be quite adaptable to our heavy clay soils, as long as water is able to drain from the planting area.  Full sun is best for plant growth and flower production, but they do tolerate semi-shaded locations that receive a good half day of sunlight.  Flowers will last longer if they are shaded during the hottest part of the day, but are produced in less profusion.  Plants in this group have stout stems that easily withstand windy locations, but the very large flowers are easily damaged in such situations.  Plants are extremely drought tolerant once established and require little if any additional irrigation.  An established P. rockii cultivar is much like an ice berg, the visible plant above the soil is only a small portion of the entire plant. We often run into rockii roots more than eight feet away from the origin plant and can only imagine the entire depth and breadth of the root system.  Cold tolerance of most P. rockii cultivars are exceptional when compared to the other woody peonies.  A number of sources make mention of USDA Zone 3 hardiness and perhaps lower.  Temperatures at our farm have reached 35F below zero on a number of occasions over the past 20 years and the rockii cultivars have shown no damage from these low temperatures.   They are equally heat tolerant, suffering no damage from 100 degree temperatures during drought years.  In most instances the woody stems are long lived and much less pruning of dead wood is required compared to the suffruticosa or lutea hybrids.

P. rockii hybrid cultivars are relatively new and unknown to most American gardeners, but are gaining popularity.  The plant remains rare in nursery offerings, but a number of American Peony Society vendors do offer selections.   For more information on this outstanding woody peony group, join the American Peony Society and read selected articles in the Bulletin.