Recognition of the Best in Peonies

Honoring Quality in Peonies and People

Values that show through in our awards 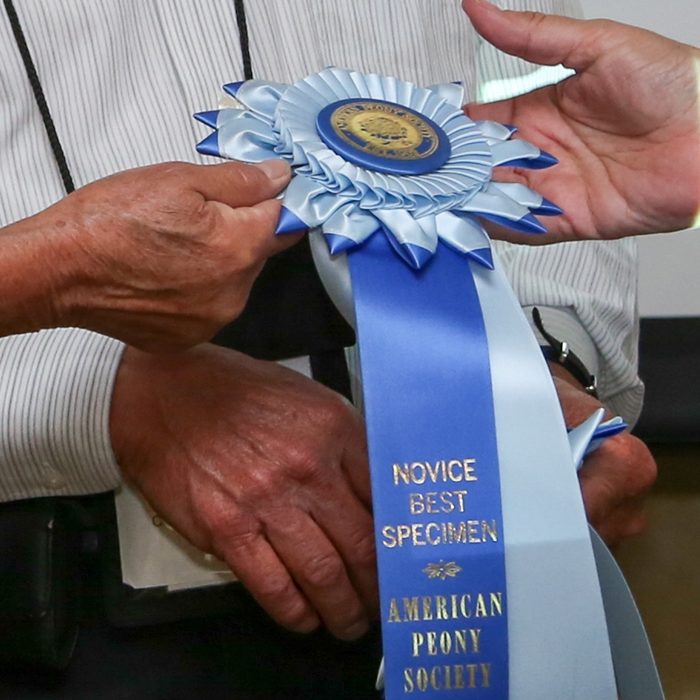 The American Peony Society has numerous peony related awards, which have been developed and promoted over the past 100 years in support of the peony.   These awards serve to recognize not only outstanding peony flowers and plants, but the people that have been important to this lovely plant.

The “Gold Medal” is awarded annually for peonies exhibiting outstanding floral qualities and in recent years has also been designated  “Peony of the Year.”  These peonies are excellent for gardeners wishing to have plants that produce outstanding flowers for use as cut flowers, arranging or simple visual enjoyment.

Personal awards are given to American Peony Society members that have given of themselves to promote the peony in a variety of ways.  Awardees include hybridizers, APS Board members, Growers, peony ambassadors, authors and a wide variety of other personalities important to the peony world.

Award of Landscape Merit peonies are recognized for their excellence of plant habit in the landscape.  Peonies with this award designation are stellar performers and superior garden plants.

Best in Show and Exhibition awards are given to flowers shown at the annual American Peony Society’s Flower Show which is held in conjunction with the convention.   An array of awards are given at this event, but the most coveted award is Grand Champion, representing best in show.   To get a healthy taste of the wide range of peony flower colors and forms, this is a “CAN’T  MISS” event!

The awarded peonies are a small slice of excellent peonies that may be available today, but there are many more.  Watch for the next additions to the American Peony Society’s Awarded Peony listings.

Herbaceous Hybrid ‘Etched Salmon’  is the recipient of the Award of Landscape Merit and Gold Medal.

Explore each award category for a wealth of information. 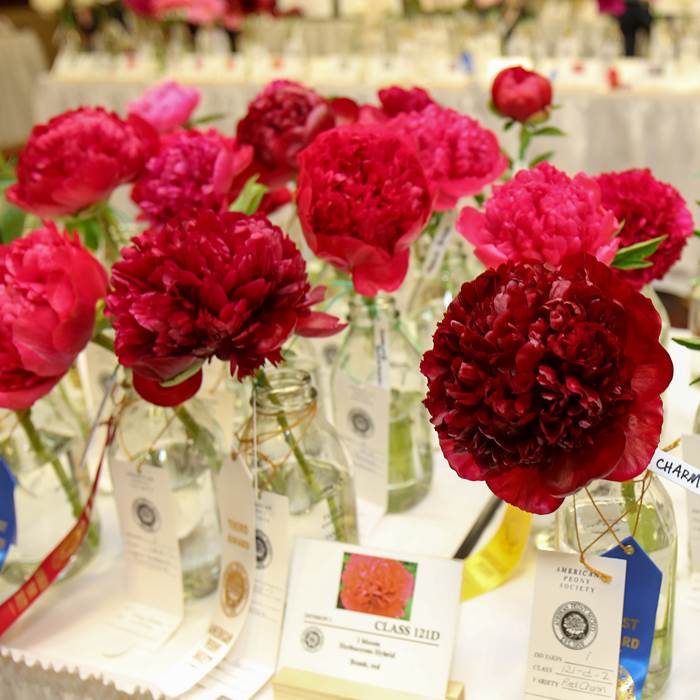 Each year exhibitors trek to the American Peony Society’s Annual Flower Show and Exhibition to present their finest blooms for evaluation by a team of judges.  While peony flowers are generally beautiful, showing them to perfection requires time, effort, skill and sometimes a little luck.  Many variables are involved in creating the best presentation of a single flower which may include:  a well formed flower, appropriate size, pristine condition, correct maturity, color, petal configuration, and preparation for judging.   Of course growing a healthy plant plays a part in the entire production of perfect blooms.

Many flowers each year receive ribbons in recognition of excellent showmanship.  Visitors to the Flower Show and Exhibition are treated to the final results by seeing hundreds of blooms prepared to perfection. We hope you are inspired viewing the entries since it is APS goal to enrich everyone lives through plants and in this case the enchanting peony flower.

APS wishes to thank and honor those who show the fruits of their efforts and hope others join in this unique activity.  Take a look at the results, much can be learned about best cultivars for showing, the people who show and other entry information.  Please see the resource block below for specific annual show results.

Best in Show and Exhibitions 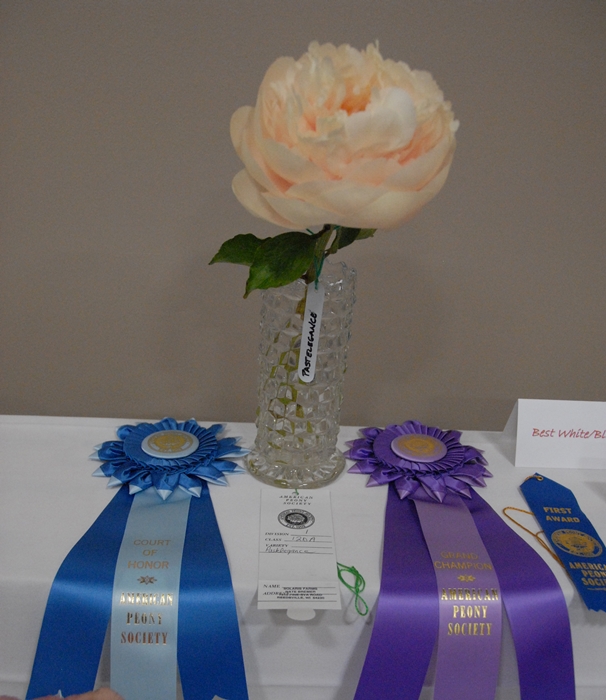 Each year the American Peony Society sponsors and organizes a peony flower exhibition, in conjunction with the annual convention.  Growers, gardeners and peony enthusiast gather to have their best flowers evaluated and viewed by the public during the show.   Flowers from a wide range of peony plant groups can typically be seen, as well as blooms from some of the newest and most unique introductions. Exhibitors bring their flowers from many locations in North America, allowing show visitors to view many different peony cultivars at one time, though in their own gardens they may bloom weeks apart.

With great anticipation and excitement, the exhibitors prepare their flowers for judging the evening before judging.  Judges evaluate each bloom in various divisions and award worthy flowers that meet definitive criteria.   The best flowers from each division are selected and further awarded, and further selections are made to determine a number of other awards.

To receive the Best In Show award, a peony must receive a 1st place award in its exhibited class of those classes presenting single blooms. Judges then select from all of the 1st place winners of the single bloom classes for representation on the Court of Honor. The Court of Honor will consist of winners according to color and type (Lactiflora, Hybrid, Itoh Group, Suffruticosa, Lutea Hybrid). The Court of Honor is then evaluated to determine the single flower representing the most outstanding judged show qualities. 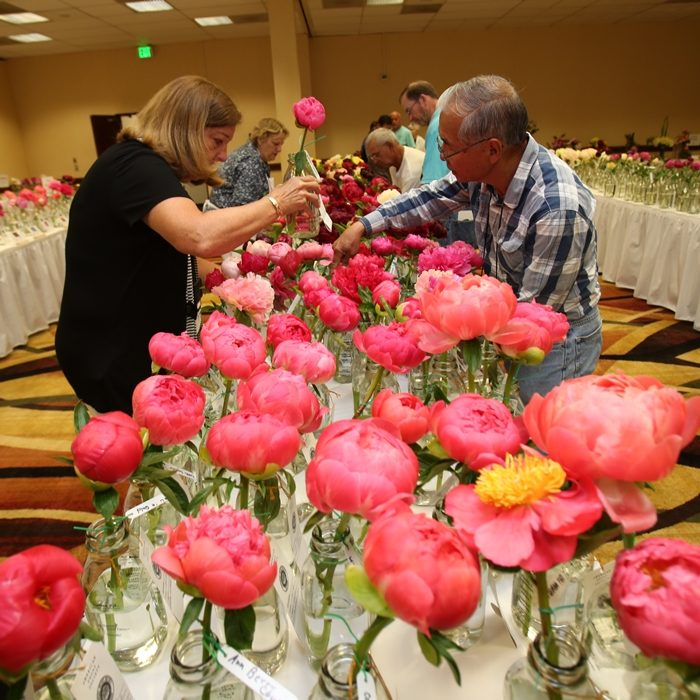 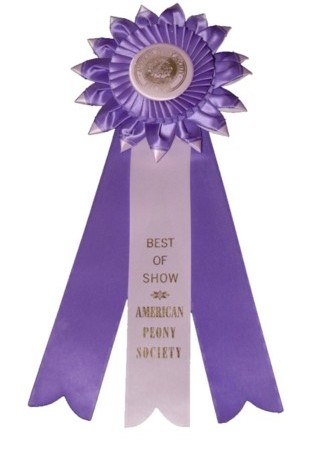 Peonies that have been awarded 'Best in Show' at the Annual APS Flower Show Exhibitions.

Exhibition results from the American Peony Society's Annual Flower Show. Find those plants that are awarded for exhibition

The American Peony Society, by way of awarding medals and certificates, has long recognized exceptional peonies. In this scheme of things the Gold Medal has always been considered the ultimate accolade, but as the Society and the interest in peonies have evolved, so too have the criteria by which these medals were awarded. Today, the American Peony Society selects the ‘Gold Medal’ peony for flower beauty and consistency, as well as, commercial availability and market price.

The APS, by way of the Gold Medal, recommends plants on the Additional Resources list ‘Gold Medal Peonies’ as beautiful additions for the garden, display, cut flower arrangement and exhibition.   These are truly some of the finest all round peonies to be found for the general public.♥ 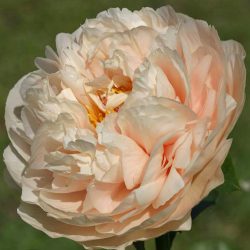 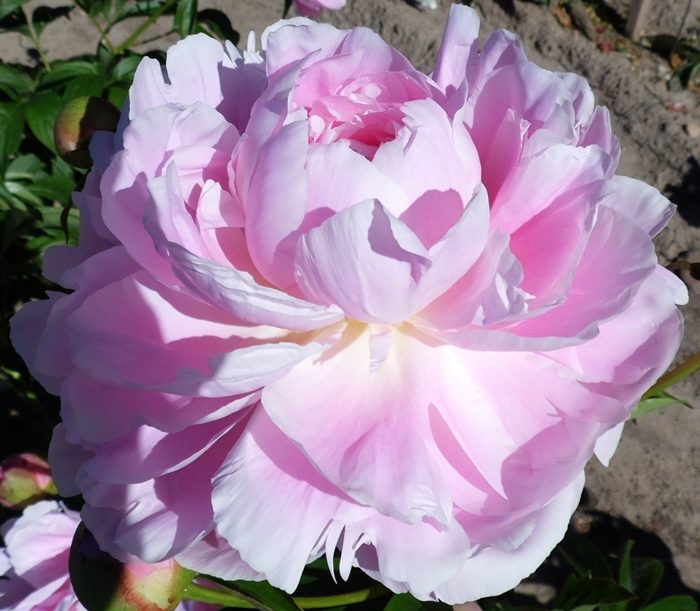 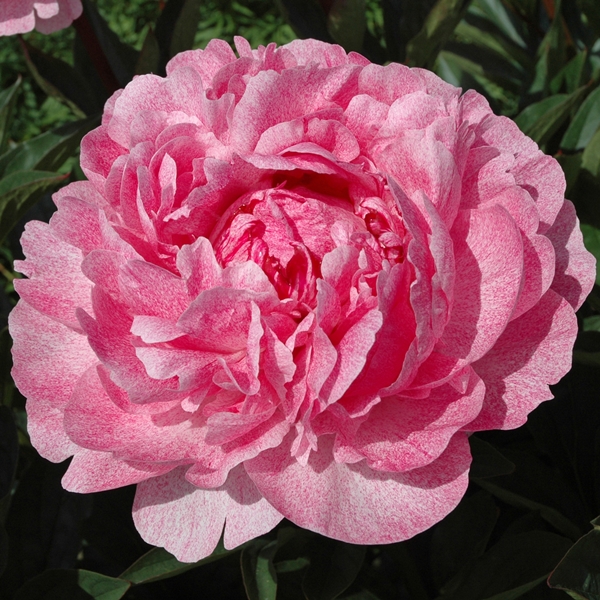 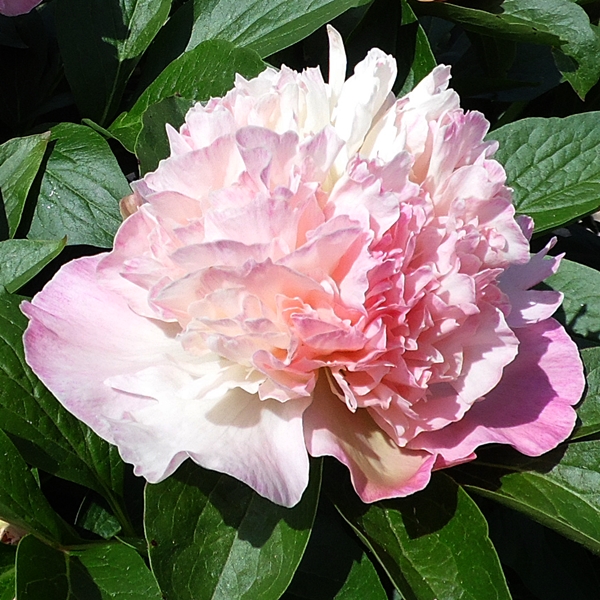 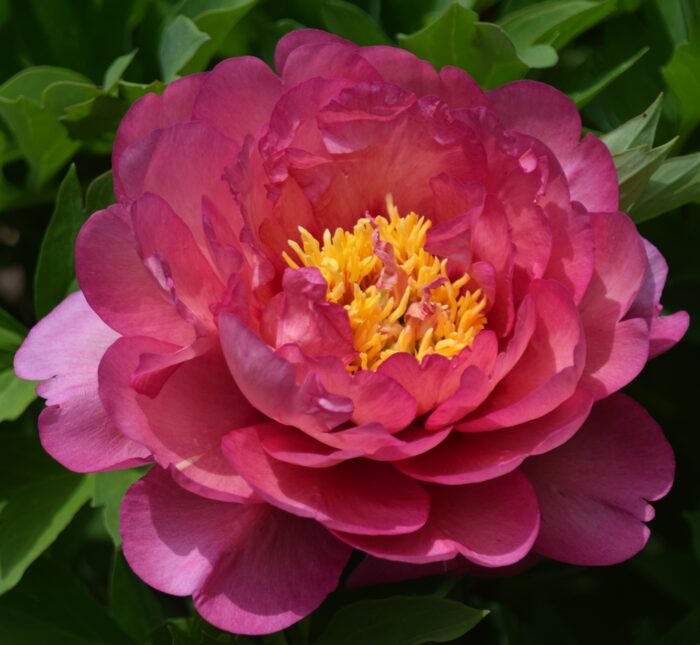 Free Standing and Reliable Beauties For the Landscape 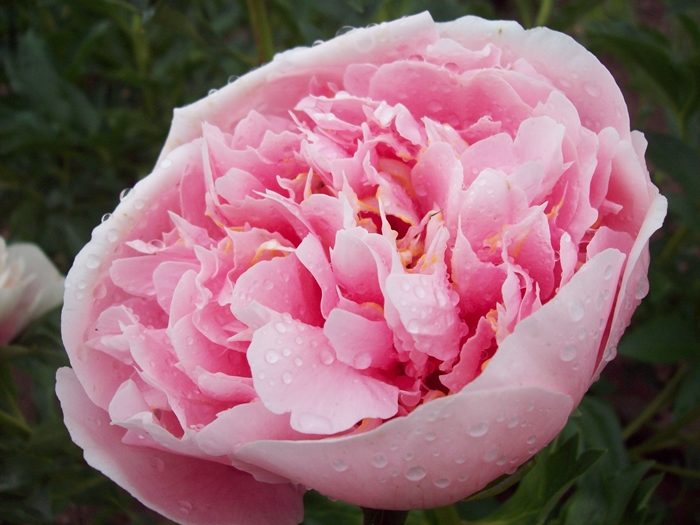 Peony cultivars bestowed this award are chosen for superior ornamental value, overall appearance in the landscape throughout the growing season, and reliable performance across North America.  Plants are required to be self-supporting in wide ranging weather conditions and reliably display their flowers.   Special attention is given to foliage quality throughout the growing season.   ALM peonies should provide gardeners and landscapers with superior plants that can be expected to demonstrate excellence in the landscape.  See Additional Resources below for a full listing and images of the Award of Landscape Merit winning peonies.

Woody peonies (tree) are not considered for this award, due to their free standing habits.   While not all woody peonies would be considered good candidates for landscaping, the vast majority are acceptable for this purpose. 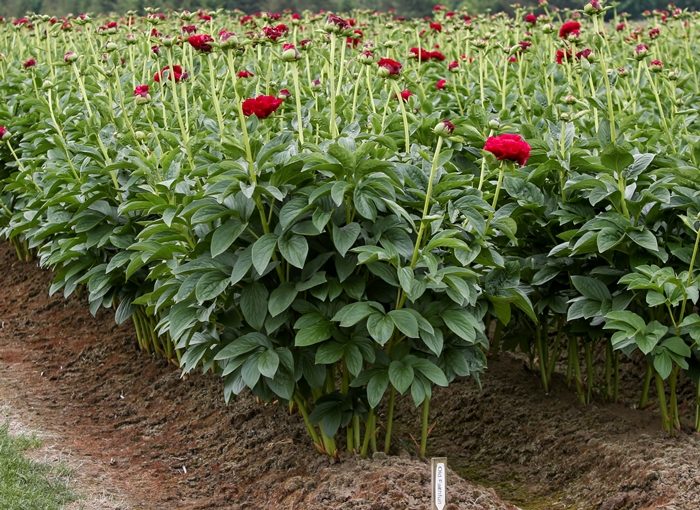 The ALM peonies are among the finest peonies for the garden and landscape. Learn the specific details of each awarded cultivar.

Honoring Members That Gave Freely of Their Time, Talents and Good Will 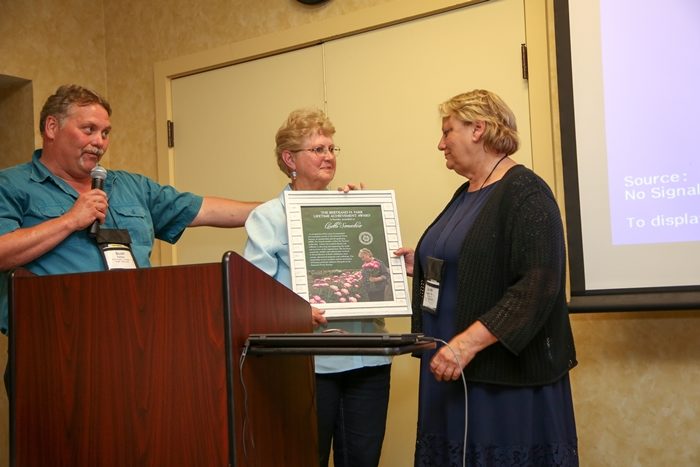 Personal awards are given to American Peony Society members who have given of themselves to promote the peony in a variety of ways.  Awardees include hybridizers, APS Board members, growers, peony ambassadors, authors and other personalities important to the peony world.

Ground breaking hybridizers are often recognized for their efforts with the A.P. Saunders Memorial Medal.   The award is named in honor A.P. Saunders, the first hybridizer to undertake an extensive hybridizing program that produced outstanding cultivars, many of which are still popular today, and many of which still form the basis of current hybridizing programs. Awardees may also have contributed to the peony world through other notable activities.

The Bertrand H. Farr Lifetime Achievement Award is given to members that have contributed to the society and peony world in numerous ways.  Authors, growers, ambassadors, organizers and leadership are among the many attributes recognized for this prestigious award.

Other awards exist which are dependent upon efforts and support given during a period of time.  The American Peony Society is thankful for past support and the hard working individuals that continue to move the peony world forward. 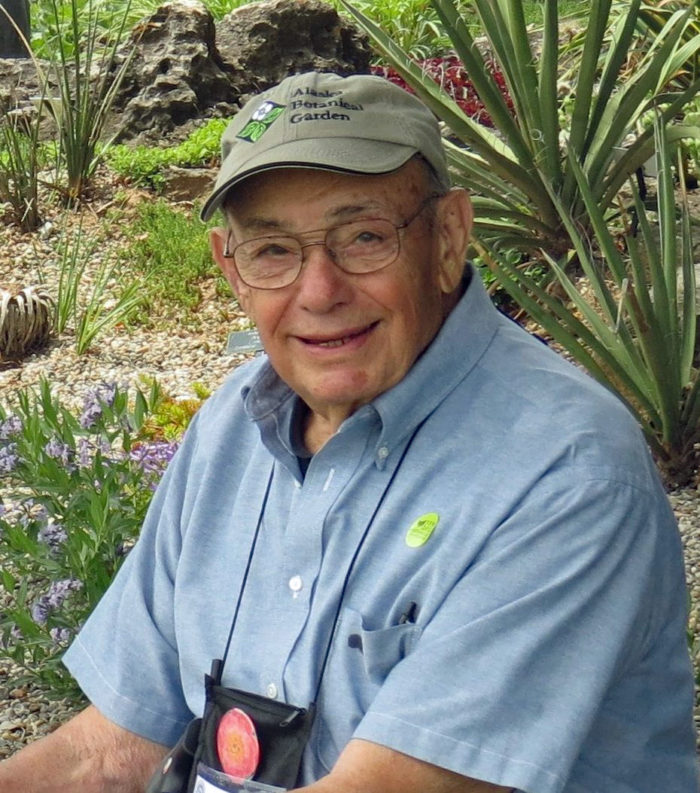 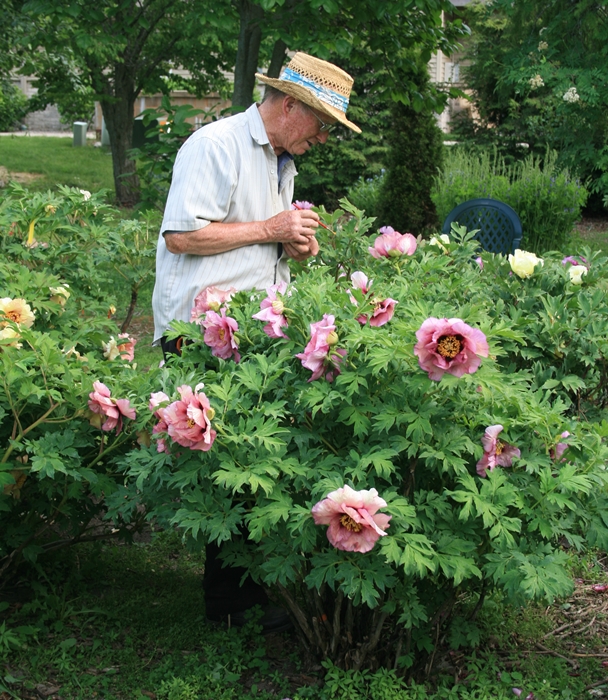 Find out more about the people that have helped to shape the American Peony Society.