Half Woody, Half Herbaceous-The Best of Both

More cultural information that can applied to Itoh peonies.

Crown division, the traditional method of propagating all, but the woody peony types, works well with the Itoh Group sorts.  During a propagation cycle (3 to 4 years), the underground stem (crown) extends somewhat with tuberous growth and swells with food storage similar in habit to the Lactiflora parent type, facilitating the process of division.  Tuberous food storage roots will similarly extend outward and downward, but will have a hard core, like the tree peonies.  After a three or four year cycle, well grown plants will yield a comparable increase.  The tuberous roots are of smaller diameter and longer than the common peony parent and somewhat less so than the woody peony parent.  Adjust the length of tuberous root on individual divisions to retain an approximately equal amount of food storage for support of first year growth.

When grown in raised rows, reset them so that the stem buds are deeper, to four or five inches below top of the raised rows, but not lower than the adjacent soil surface.   Moisture support during the first year is better when planted more deeply and the buds are protected from excessively wet conditions.  So placed, when the stems grow in future seasons, they will form stem buds at multiple levels:  the original crown level, very near or at the soil surface and one, two or three internodes in between on fully perennial portion of underground stems.  This affords the gardener a maximum flexibility of propagation choices.  The buds on perennial stems can be used for grafting scions, or, if left on the replant pieces, the extended stem can be positioned horizontally where all buds will put up stems, contributing to more rapid expansion of the bush in the following seasons.  Alternatively, if taken up for dividing after three or four seasons, it may be found the growth  at each of the original stem buds will have grown into a quality division which can be taken with a minimal dividing damage. 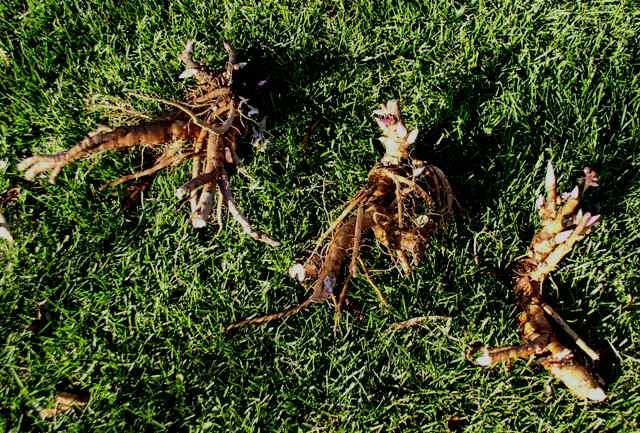 Additionally, some Itoh Group cultivars, although not all, have proven successful in micro propagation (in glass, under sterile laboratory conditions).  When a cultivar succeeds, a large number of its plantlets can be produced in a comparatively short cycle.   When grown large enough on artificial media to establish upon transfer to soil, those which survive the transfer can then be grown on to a size that can be cataloged for sale.  This system has been going on long enough for production management challenges to have been resolved. A number of these micro propagated Itoh group peonies are now beginning to be offered for sale (inexpensively) in four inch pots.  Concern involving the root growth pattern of micro propagated peonies is valid, as these plants’ roots grow in a tight whorl, which is not an easily broken pattern.  Mutations of flower and plant structures have also been more common with this type of propagation, but better laboratory techniques have been instituted to resolve this issue.

Learn how peonies from other groups are divided.